Situated in the historic ‘Cutting Room Square’ in Ancoats, Manchester, Hallé St. Peter’s originally dates back to 1859 and was the first Anglican Church in the predominantly Catholic neighbourhood and has been used as a permanent rehearsal space by the world renowned Hallé symphony orchestra since 2013.

The Hallé’s new three-storey extension (known as The Oglesby Centre) is interfaced with the existing Grade II listed building and represents one of the final steps in the regeneration of the local area which is now home to a thriving community of residential developments, independent restaurants and bars. The project was supported by the Arts Council and was funded by the National Lottery. The total value of the Hallé St. Peters transformation was £6.6 million.

On this prestigious £6.6 million project, JWD Architectural Aluminium were selected to design and install the rainscreen cladding system, and worked closely with Stephenson Studio Architects to achieve a recessed fixed solution complete with specially fabricated fused fin details which were imperative to the architect’s design. 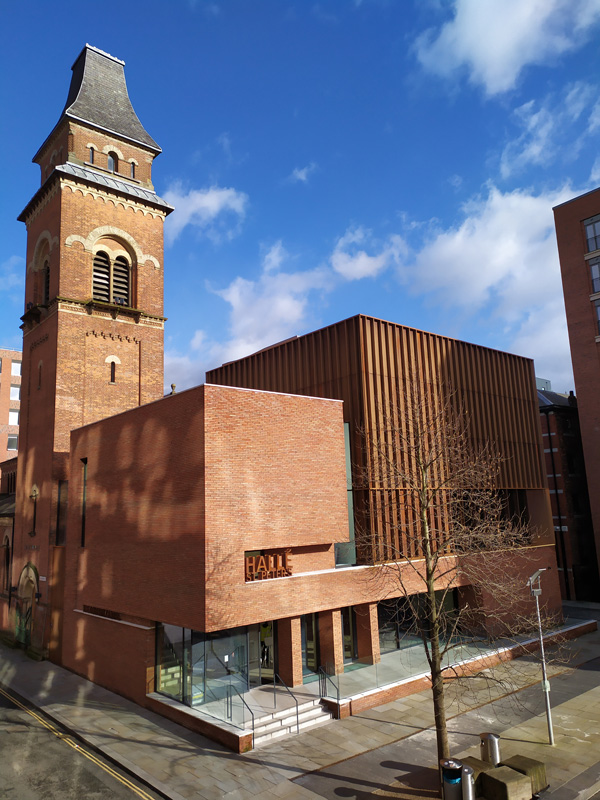 The process of choosing a suitable product for this project took several months, involving considerable design and value engineering in order to meet the Client’s budget and aesthetic requirements. The brief was for the ‘new’ extension of St Peter’s Church to look in keeping with the age and history of the existing building, and a weathered, rustic appearance was therefore crucial to achieving this.

Several potential solutions were explored during the selection process, including Powder Coated Aluminium and an ACM Composite Panel System, but these were ultimately rejected by the Client due to the design implications which effectively made these products unfit for purpose. The final system chosen was the Liberta Cor-Ten 700 system, supplied by Ruukki. Due to its unique chemical composition, Cor-Ten weather-resistant structural steel has a significantly better ability to resist atmospheric corrosion than similar general structural steels. This is due to its oxide layer i.e. the patina which forms on the steel surface over a period of time which is resistant to the action of alloys and has low oxygen permeability. This patina is initially reddish brown in colour, becoming darker in tone over the course of time, with individual variations depending on the building’s location. Furthermore, the product does not require any separate surface treatment, resulting in lower environmental loads and costs throughout its life cycle.

The main body of the works consisted of a square, box-like construction from which JWD could access two larger elevations via scissor lifts close to the building. However two other elevations had restricted access from roof areas and specialist scaffold was therefore needed to gain access from the new lower level building roofs. Cherry pickers were also used to boom over large void openings which were in place for glazed sky lights. In addition to the main Liberta Cor-Ten 700 system, a wide range of products and accessories were installed by JWD for this project, including structural steel framing systems, weatherboard, breather membrane, steel tophat rails, fins and cappings.

Attention to detail and exceptional workmanship were of paramount importance throughout this project. For example, the design of the cladding system had to line up precisely with the level of each vertical and horizontal fin – indeed the architect was extremely insistent of the accuracy of this installation making regular checks in person. Bespoke lighting and water drainage gutters also had be incorporated with ‘secret’ details to hide behind the Cor-Ten steel cladding for aesthetic effect, whilst also being functional at the same time. 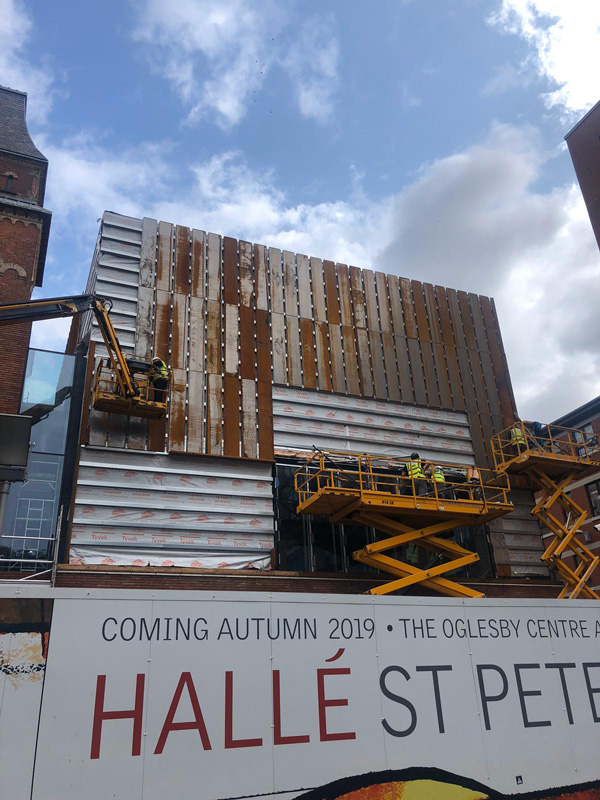 Site access was also extremely tight in areas due to local pedestrian and road access still being in use. The project was built within an historic square in the Ancoats area of Manchester City Centre and, as a result, the existing roads were also very narrow. This created logistical issues that needed to be overcome, in particular gaining access for deliveries and MEWP equipment. In addition this Grade II listed building was surrounded by other construction sites on three of the four sides, all which were serviced by deliveries and works which forced road closures on a very regular basis. To overcome the challenge of these obstructions, all deliveries were booked in, held off site and then called in when access could be safely and effectively made.

JWD’s specialist works were carried out under Main Contractor HH Smith Ltd and we worked in close co-operation with them in order to deal effectively with the Client and other neighbouring influences. The existing church building which was attached to the extension had to close during the works programme, as many internal elements of this existing building were also being refurbished. However, all other local businesses and residential buildings remained open, meaning that careful co-ordination of deliveries and safe working practices were essential at all times in order to ensure that the project ran smoothly and without any risks or compromises.

The project was completed on time for a grand re-opening that had been scheduled by the Hallé Orchestra. This was well documented in several newspapers and was also featured on the North West Tonight News TV programme with a special piece dedicated to the famous Orchestra’s new home. In addition, the ‘rusty’ cladding effect of the new extension has not only been well received by the Client and its users, it has also been greatly admired and appreciated by owners of neighbouring buildings due to the fact that it is firmly in keeping with the appearance and character of the Listed church building that it is attached to. 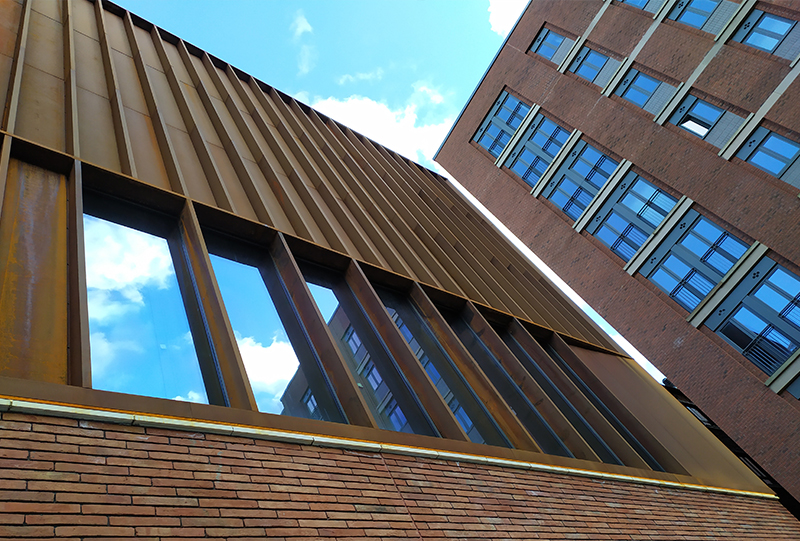 The total project build was over £6 million with JWD’s cladding element valued at approximately £600k. This included work on the main box elevation cladding, internal flashings, external specialist signage and cladded external doors. In total, JWD Operatives were on site for 12 weeks, and our works were not only delivered on time but they were also profitable. The Design, Manufacture, Installation and Management Teams at JWD all made a conscientious effort to make this project a success for the Client and we are all extremely proud with the outcome, particularly as this was JWD’s first Cor-Ten project.

JWD are extremely proud to have worked with such a prestigious and well known organisation, within the City of Manchester where our company is based. The Client was extremely satisfied with all aspects of the work, and were delighted with the amazing transformation that the building and its facilities have seen. The relationship between all parties was a total success, ultimately achieving a happy client and a fantastic looking building. As a result, further schemes are now being planned for these parties to again work together in the future.